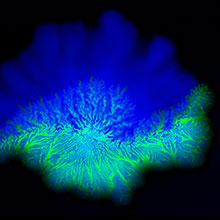 Our research is inspired by the extraordinary levels of biodiversity that are typically present within microbial communities. For example, a single liter from a lake, a river,... read more